I have seen this book get rave reviews when it came out but honestly, at the time, it wasn’t high on my TBR list. In fact, I probably wouldn’t have read it at all had I not received it as a gift. And yet again, I would have missed out on a great book. 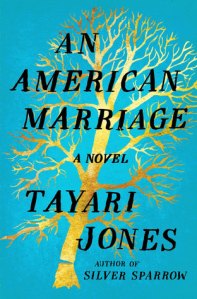 Given the current racial tensions in the United States following the death of George Floyd, this was a good book to read to give some perspective on African American issues. Granted it is fiction, but once again, the fiction narrative provides a realistic picture of what minorities face by the police and justice system. But this book goes into so much more.

Roy and Celeste are happily married, making plans to have children, open a business and Roy to move up in his job, when suddenly their world is torn apart. A woman falsely identifies Roy as being at the scene of a crime and despite Celeste providing testimony to the contrary, Roy is convicted. And it all comes down to the fact that Roy is African American. Jones highlights everything that is wrong with the justice system and the racism embedded in it. But the arrest is just one part of the story.

What Tayari also shines a light on is the impact these decisions have on these families and how even love can only go so far. What happens to each of these characters is understandable and yet infuriating. I was angry with Celeste at what she does but at the same time I couldn’t help wondering if I wouldn’t have done the same thing. As she says, she is innocent. She didn’t ask for any of this to happen, but at the same time, neither did Roy. In some ways I thought Roy was being selfish, but other times I could totally understand how he felt. In an essay about the book, Jones says she purposely makes the situation where none of the characters are right or wrong. And by doing so, the reader is presented with a full picture on how this can impact everyone and you are left with a bundle of mixed emotions with no one to direct them at.

While the ending is bittersweet, I honestly don’t think it would have worked any other way. No one would have been happy and while it is hard to give up something such as love, sometimes letting go is the best decision for everyone involved.

It’s been a few weeks since I read this but I still think about it. It has made a few lists of fiction book recommendations that deal with African American issues or experiences. I would highly recommend it.

Have you read “An American Marriage”? What did you think? What other books that deal with minority issues would you recommend? Let’s discuss!

4 thoughts on “‘An American Marriage’ by Tayari Jones”