So obviously I didn’t actually spend the weekend with the Alcotts or the Emersons, but I spent one helluva literary weekend walking in their footsteps in Concord, Mass.

Remember, back in June when I mentioned that my best friend created a literary weekend for me to visit Orchard House, where Louisa May Alcott wrote Little Women? Well, I cashed that present in two weeks ago and it was one of the best presents ever. If you want a relaxing weekend that also fills your bookish barometer, then this is it.

It all started when we arrived at our Airbnb, a house that rested along the pond.  I am not going to lie, I had brief misgivings about it. The house is in the middle of the woods and set so far back that you have crazy long driveway to go up before you get there. We arrived at night so as my friend navigated the car up the narrow lane, I could only think of the movie “Get Out.” But my misgivings were unnecessary. Our host was a sweet old man who welcomed us warmly and the next morning had coffee and homemade scones waiting for us. We took them out to the chairs that overlooked the pond, and peaceful is putting it mildly. I could have sat out there all day. While it wasn’t Walden Pond (we didn’t get a chance to go), it was close enough. No wonder Emerson and Thoreau were so inspired.

After our wake up treats, we set out on our adventure, hell bent on getting to Orchard House early so we would get into the tour. With time to kill, we took a quick drive through the downtown area to get the lay of the land, grabbed some bagels and coffee and sat in the parking area of Orchard House until it opened.

We weren’t allowed to take pictures inside the house so these exterior shots will have to do, but the tour was amazing. The most surprising thing was how much they had preserved. Usually when you go on tours of old historical buildings, a lot of it has been recreated. At the Alcott house, everything was the original, right down to the wallpaper on the walls. You couldn’t help but get goosebumps as you walked through the house, and see exactly how Louisa May Alcott lived. Louisa’s sister May, was the artist in the family (you may recognize her as Amy in Little Women) and her drawings are still on the walls in her room. She used to recreate paintings taken from Ralph Waldo Emerson’s house to practice. Her paintings she created in Europe hang on the walls throughout the house. When you get to Louisa’s room, you can stand near her desk that her father built between windows overlooking the road, the same desk she wrote the book that made her famous. As you go through each room, you are given the history of each of the family members and their impact on Concord.

After the tour, we were back in the gift shop where I did some damage. It took all of my strength not to buy every single Alcott book, since I have made it my mission to read everything she ever wrote. But I settled for her book, Hospital Sketches, which is her account of being a nurse during the Civil War as well as a biography by Madeline Stern, one of the better known biographies of LMA.

We didn’t want to leave the beautiful grounds but there was much more to do and see. Our next literary stop was Sleepy Hollow Cemetery to visit Author’s Ridge where Louisa May Alcott, Ralph Waldo Emerson, Henry David Thoreau and Nathaniel Hawthorne are buried. You can’t miss their graves because visitors have laid literary gifts at the grave sites. 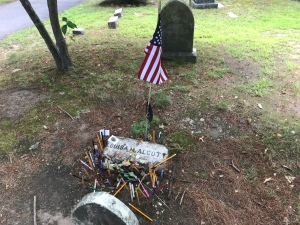 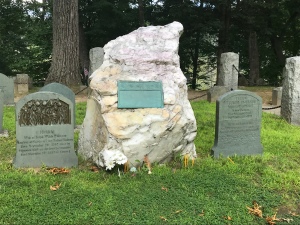 To take a break, we decided to go to the downtown area, where there two book stores, one of which was a used book store. The used book store was interesting to walk through simply because of their rare edition collection. They had first editions of the authors, which were way beyond my budget. I think Emerson’s book was priced at $3,000. *sigh* Oh to dream. Though I am not going to lie. I almost bought an autographed copy of Little Women I found in the antique shop down the street for $125. I thought better of it and kept walking. I did find a bookish mug that I just had to buy. 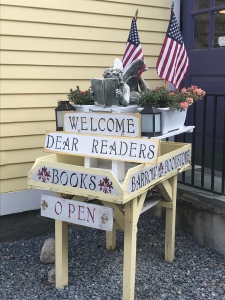 After an awesome lunch at a small market and café in downtown, we went off to the Emerson house, which we learned was open for tours. Just like the Alcott house, everything in the house was owned and used by Ralph Waldo Emerson and family, including the books that still line his books shelves in his study. What was even more astonishing is that the Emerson family still owns the house, so the staff at the museum work for the family. In fact some of the family still live in Concord. I was blown away. 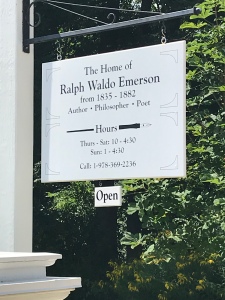 The rest of the day was just spent hanging out back at our lodging, relaxing, reading and just enjoying the rest of the weekend before heading home. Because we had so much fun, we decided that these literary and educational trips were something we want to continue doing, so I am sure I will have several more of these posts in the future.

One thought on “My literary weekend with the Alcotts and Emersons”