I started this book late on a Friday night not knowing what to expect, but I found myself flying through it. The next morning, I woke up early to finish it. My fiancé woke up about an hour later to find me lying in bed with 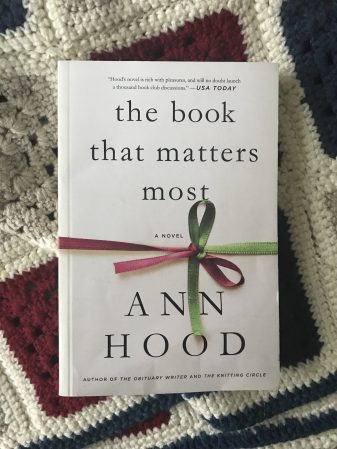 tears running down my face as I was just reaching the end. “That good?” he asked. I could only nod.

This is only the second Ann Hood book that I have read but she is now an auto-buy author for me.  Hood has a knack for weaving multiple plots into a story until they have no choice but to come together in the most unexpected ways. And when they do? Well be prepared for your heart to break.

The Book That Matters Most focuses on Ava, who is in the middle of a divorce and is looking for companionship when she decides to take up her friends offer and join the local book group. The group’s theme for the year is to read the books that matter most to them, with each member picking the book for a particular month. Ava finds herself picking a book from her childhood that helped her through the deaths of her sister and mother. The other focus is on Maggie, Ava’s daughter, who is supposed to be studying abroad in Italy but instead is living in Paris. Having been dumped by the boy that she followed to Paris, Maggie has dreams of becoming the writer she wants to be but inevitably enters into a destructive relationship with an older man.

If anything this book is about the power of literature. Each book has a hand in transforming Ava and helping her to overcome the pain from the present as well as the past. At first, she doesn’t want to read the books that have been picked because it is too difficult, but then she begin to make an effort and she find something in every book that she can relate to, which helps her reflect on her own life. Her search for her own book pick, which has gone out of print, forces her to confront her past and the secrets that have been long covered up.

Maggie’s story is more heart wrenching as her destructive behavior draws a close line between life and death. Reading her story made me hold my breath and wonder what had happened to this girl that made her act out. Coincidentally enough, she finds a small book store where she can escape from her demons and distract herself with books. She hopes that the store can become her saving grace.

The story is a slow build but it keeps the reader turning the pages, either to find out how Ava will overcome her past or how Maggie will survive. Having read Hood’s Obituary Writer, I knew at some point that the mother and daughter’s stories would connect at some point with a common thread. However, I was not expecting what that thread would be. It was more powerful that I could have anticipated and even now, as I write this, tears prick my eyes. Because the book that matters most is the book that will define who you are.

One thought on “The Book That Matters Most by Ann Hood”