I don’t think it would be out of the ordinary to say that most of us have spoken to the books that we have read. Whether it through tears, or laughter, or even anger, we have looked at the book that had wrought those emotions and cursed it, kissed it or even hugged it to our chest with love. And we are not the only ones. 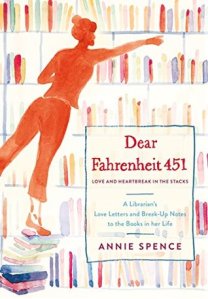 In this endearing book, we read the letters Annie Spence has taken the time to write to some of those books. Some are her personal favorites or dislikes while others are the books that are circulated in the stacks, some that need to be replaced and others that have been long forgotten and need to be “retired”.

She addresses not the authors, but the books themselves. Spence starts things off with a heartwarming love letter to “The Goldfinch” (by Donna Tart), whose book has become so worn with use that she takes it home to retire on her shelves. Her letter is not only a tribute to the book itself that has been handled so often but also descriptive as she describes the spine that is bent, cracked and broken. You can’t help but want that book in your own collection. It deserves to be loved.

One of my favorite letters is the one to “Grey” (by E.L. James). Spence will have you in hysterics as she breaks up with Grey for the audacity of being so popular that old ladies want to check him out. She also breaks up with “Dear John” (Nicholas Sparks) which I almost could not forgive her for until she had me laughing again. Her reasoning is definitely valid.

This book is broken up in two parts really. The first half are her letters to a various number of books that range on a number of topics from health to economics to fashions. The other half are more a series of lists, among which is her list of favorites. I had always wondered what a librarian liked to read. It’s actually a question, Spence says, she doesn’t get asked enough. And here she tells us. She also does a list of comparisons of two books that could be married to each other, etc. I liked and hated the second half of the book. I liked it because we got some recommendations of books to read. I hated it because my TBR just got longer.

I highly recommend that if you plan to read this book, you listen to the audiobook with the narrator Stephanie Spicer. She was amazing at reading the letters with inflection and she brought out the emotions in Spence’s letters, especially the funny ones. I was so engaged, my commute to and from work were a blur. I was sad that this book had to end. I wish there were more.

5 thoughts on “Audiobook: Dear Fahrenheit 451: A Librarian’s Love Letters and Breakup Notes to the Books in Her Life”