I first discovered Catherine Marshall in high school where I stumbled upon her book, “Julie”. I was struck by Marshall’s writing and ended up loving the book so much I begged the librarian if I can keep it. Luckily she said yes. 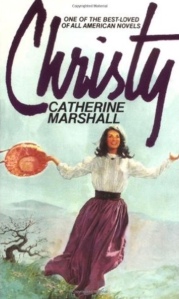 So when I happened across Marshall’s book “Christy” at a library book sale this past spring, I immediately bought it. Huh, funny that I got acquired both books from a library. And like “Julie”, I loved “Christy.”

Right from the first opening lines, Marshall’s writing surrounds you. The real world fades away and the scene of the novel rolls out before you like a red carpet that never ends.

Christy Huddleston is a 19 year old embarking on a journey from her home in Asheville to Cutter Gap, Tennessee, a small community in the Smoky Mountains. There, Christy will teach at the mission school. And as she traverses the land to get there, you feel like you are riding right alongside her. You can feel the cold, see the bare trees, the icy waters.

Christy gets to the school which also serves as the church and is met by desolation. Her first day, she finds barefoot children walking through the snow, some from miles away. Many of them are dirty and wild, unfamiliar with societal behaviors. It is an eye-opener for a girl who has never known such poverty.

However, as she teaches the children and they get into a familiar routine, Christy learns that she isn’t merely teaching but learning as well. Never before has her faith been tried and tested and her will questioned. It seems that Christy is confronted with one obstacle after another as she tries to show the mountain people a new way of life.

There is superstition and resentment surrounding the school and the church, family conflicts and volatile disagreements over the stilling of moonshine, death and disease and of course, the conflict of Christy’s heart and love. Christy must confront each as they come and her religious beliefs play a big role in how she overcomes each obstacle.

Marshall does delve into religious philosophy but since the story takes place on a mission, it works. With every complication, Christy’s faith is tested and she must wrestle with what she believes. You can’t help but relate to her and feel the conflict as she does. You cheer her on as she sets her determined mind to do something and feel disappointment when something fails.

Despite there being a number of characters, including the various children at the school, they each have a story and help to shape Christy’s own story and character. From Lundy who is the troublemaker to Fairlight Spencer, a mother who learns to read and shows Christy just how much she is needed.

The ending to the book was a bit surprising and I would like to think Marshall had planned for a sequel. I didn’t want this book to end. I have never been to Tennessee, nor the Smoky mountains, but it didn’t matter. Marshall transports you there with her words. And the ending felt like a beginning. I want more!

I remembered feeling the same way when I read “Julie” and I am so glad that I had a chance to read another Marshall book. I would definitely recommend people read this book.