While I listened to these two at separate times, I am taking these two books together because they are both by Carrie Fisher and frankly because they were more alike than I realized. 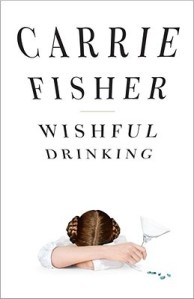 It’s actually my one criticism of the two. There was so much information provided that was the same that I wondered why she did two books. It kind of irked me, especially because since I was listened to them on audio back to back, it was like having a repeat conversation. You kind of want to throw your hand up and make the motion for her to wrap it up.

I will say that I liked Wishful Drinking better than the Carrie Diarist but again I think that is because I listened to that one first. Princess Diarist was interesting because she shares details about her affair with Harrison Ford. (I wonder if Harrison Ford has read it and what he has to say.)

With that being said, I liked listening about Carrie’s life in both of these and her upbringing to two famous people. I always wonder about the lives of children of stars and how they are raised, though Carrie’s was not exactly surprising. I was more surprised by her depiction of her mother Debbie Reynolds and her craziness. I guess we sometimes forget that celebrities are people just like the rest of us.