This was a book that I acquired during a Christmas book swap this past December and in my attempt to read through my personal TBR, I picked this up. I didn’t think that I would like Liane Moriarty, especially because I tried reading her other book “The Husband’s Secret,” and it ended in a DNF.

I was kind of skeptical going into this one but I was pleasantly surprised that I liked it as much as I did. Not my absolute favorite and probably not one that I would reread but it was enjoyable. 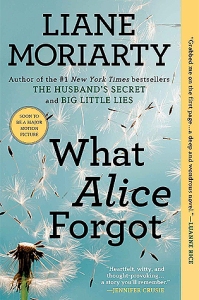 Alice Love is twenty-nine, crazy about her husband, and pregnant with her first child. So imagine Alice’s surprise when she comes to on the floor of a gym (a gym! She HATES the gym) and is whisked off to the hospital where she discovers the honeymoon is truly over — she’s getting divorced, she has three kids, and she’s actually 39 years old. Alice must reconstruct the events of a lost decade, and find out whether it’s possible to reconstruct her life at the same time. She has to figure out why her sister hardly talks to her, and how is it that she’s become one of those super skinny moms with really expensive clothes. Ultimately, Alice must discover whether forgetting is a blessing or a curse, and whether it’s possible to start over…

Can you imagine waking up and losing 10 years of your life? I can’t, but this book got me thinking of what if.

I definitely felt for Alice as she rediscovered who she is. Even though the reader discovers right away that she isn’t 29 but 39, with three children and a marriage that is falling apart, the answers to the question of why are sprinkled throughout.

I liked how Moriarty uses the other characters to shed light on what has happened over the past 10 years. For example, the relationship between Alice and her sister Elizabeth is uncovered through letters from Elizabeth to her therapist. A close friend of the family also uses letters to a “friend” to relate what is going on. It wasn’t just through direct contact with Alice but through their interactions with other people.

I liked all the characters except for Alice’s soon-to-be ex-husband Nick, who was a complete a**hole. I mean, once the details of their marriage are uncovered you can understand why but it didn’t excuse the fact how rude he is even when he knows that Alice has lost her memory. Really?!! The woman doesn’t know what the hell is going on! Give her a break!

The biggest problem for me was the last few chapters of this book. I felt that the whole book was dragged out until a specific point. Like the author felt that she had reached the main point and rather than explain anything further, she would just wrap it all up with a bow and that would be it. Some would probably say ‘well what is there more to say?’ Moriarty does give us a chapter or two about what happens with each of the characters but I thought that it was just too easy and I couldn’t help feeling disappointed.

Have you read “What Alice Forgot”? What did you think of it? Do you agree with my assessment? Let’s discuss!

2 thoughts on “What Alice Forgot by Liane Moriarty”